Taxpayers bail out GM so they can import Chinese cars 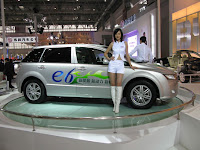 U.S Taxpayers have bailed out GM for $14 billion. Now, GM plans on importing Chinese cars. So, the U.S. government is borrowing money from the Chinese to save GM. Then, GM can build cars in China and sell them to us. After which, we will pay taxes to the government and they will use that money to pay on the debt we owe China. Got it? According to Fox News:

The latest twist in Detroit’s do-over has General Motors becoming the first automaker to import Chinese-built cars into the United States, according to Automotive News.

Citing a leaked document shown to lawmakers who are overseeing the restructuring of the auto giant, the newspaper reports that GM is planning to market made in China cars to American consumers as early as 2011, the same year the company’s heralded Chevrolet Volt electric car goes on sale.

General Motors is currently the best-selling foreign automaker in China, and Buick is number one brand overall, part of the reason that the nameplate was saved during a recent round of cuts that included the elimination of Pontiac. As an example of the growing influence of that marketplace on the company, the interior of the upcoming replacement for the Buick LaCrosse sedan was designed at a GM studio in Shanghai.

I am so fed up with GM. Whenever I can buy a new car, I refuse to buy from them.

Soviets proved, they could build Volgas, but they couldn't sell Volgas.

"I am so fed up with GM. Whenever I can buy a new car, I refuse to buy from them."

Ford is the only Big Tree auto manufacturer I have any respect for.

hey fellow drivers anyone out there looking for a life style change do you live in the us, canada, the uk, france or spain you may qualify to get payed to drive someone elses brand new car and give your critisims. to see if you qualify visit.

if you qualify its really worth it for the car alone let alone the weekly income top up you recieve. i really rate it. just have a look maybe not your thing tho.