Hugo Chavez supplies Iran with uranium for its nuclear program 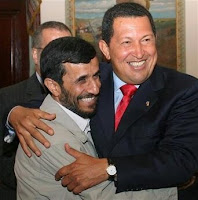 The Marxist leaders of Venezuela and Bolivia are supplying Iran with uranium according to a new Israeli report. Via Gateway Pundit.
FOX News reported:

Venezuela and Bolivia are supplying Iran with uranium for its nuclear program, according to a secret Israeli government report obtained Monday by The Associated Press.

The two South American countries are known to have close ties with Iran, but this is the first allegation that they are involved in the development of Iran's nuclear program, considered a strategic threat by Israel.

"There are reports that Venezuela supplies Iran with uranium for its nuclear program," the Foreign Ministry document states, referring to previous Israeli intelligence conclusions. It added, "Bolivia also supplies uranium to Iran."

The report concludes that Venezuelan President Hugo Chavez is trying to undermine the United States by supporting Iran.