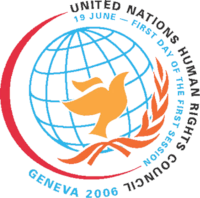 The U.S. now has a seat on the U.N. Human Rights Council. This is the first time for the U.S. Previously, we boycotted because the commission included such notable human rights activists as Cuba, Saudi Arabia, China and Russia. President Obama apparently feels comfortable in this group. AP is reporting via Google Hosted News:

Former President George W. Bush's administration boycotted the council over its repeated criticism of Israel and its refusal to cite flagrant rights abuses in Sudan and elsewhere.

But the U.S. announced in late March that it would seek to join the council to help make it more effective, reflecting President Barack Obama's desire to create a "new era of engagement" with the international community.

Even though the U.S. did not face competition in its regional group for a seat on the 47-member council, it needed to get at least 97 votes — a majority of the 192 U.N. member states — in a secret ballot. It did far better, winning 167 votes.

"We received 90 percent of the valid votes cast," U.S. Ambassador Susan Rice pointed out after the vote. "And we're gratified by the strong showing of encouragement for the United States to again play a meaningful leadership role in multilateral organizations including the United Nations on the very vitally important set of issues relating to human rights and democracy."

Rice was asked whether it wasn't impossible for the council to be effective because the U.S. and other members have been accused of failing to respect human rights.