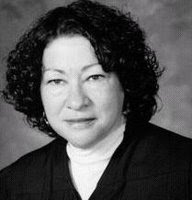 Obama has picked, Sonia Sotomayor, a female hispanic liberal activist for the Supreme Court. That just about covers all his base supporters. Why are we not shocked?
From National Review's Bench Memos:

Judge Sotomayor is a liberal judicial activist of the first order who thinks her own personal political agenda is more important that the law as written. She thinks that judges should dictate policy, and that one's sex, race, and ethnicity ought to affect the decisions one renders from the bench.

She reads racial preferences and quotas into the Constitution, even to the point of dishonoring those who preserve our public safety. On September 11, America saw firsthand the vital role of America's firefighters in protecting our citizens. They put their lives on the line for her and the other citizens of New York and the nation. But Judge Sotomayor would sacrifice their claims to fair treatment in employment promotions to racial preferences and quotas. The Supreme Court is now reviewing that decision.

What is her position on illegal immigration? I have read that there is one female judge who is a pro Amnesty activist. Was it she or someone else? I cannot remember now but will check it out.

I am writing a post on this too and after I do I will read yours.
~Lorna

My favorite quote from her is this gem: "I would hope a wise Latina woman with the richness of her experiences would more often than not reach a better conclusion than a white male who hasn't lived that life."