Safe Schools Czar: Killing Someone Who Calls You Names is not Aberrant Behavior 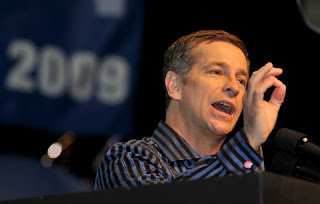 We need to own up to the fact that our culture teaches boys that being “a man” is the most important thing in life, even if you have to kill someone to prove it. Killing someone who calls you a faggot is not aberrant behavior but merely the most extreme expression of a belief that is beaten (sometimes literally) into boys at an early age in this country: Be a man – don’t be a faggot.

Kevin Jennings has already been accused of condoning pedophilia.
Posted by Bluegrass Pundit at 5:57:00 AM

'They are just doing what they are taught'
Perhaps a long hard look at what IS NOT BEING TAUGHT in schools hey?
Pouring money into studies to see where the education system is failing. Pour the money into FIXING it. These are our children, the schools have a duty of care, and they are one of the unsafest places we can send them.