Amusing Report: Kim Jong-un is so fat his ankles won't support him... 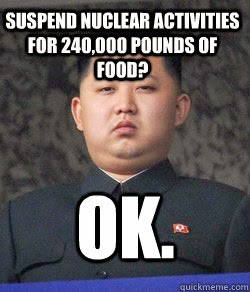 Many North Koreans are starving...

Kim Jong-un, the North Korean dictator, has become so fat while in office that his ankles have fractured under his own weight, it was reported on Tuesday.
The 31-year-old, who has looked increasingly portly since taking power, had to undergo a hospital operation after putting too much strain on his ankles during a gruelling round of official engagements.
The treatment has also been linked to his unexpected failure to attend a recent session of the Supreme People's Assembly, according to a Pyongyang source who spoke to the Chosun Ilbo newspaper in neighbouring South Korea.
Unlike other members of North Korea's political elite, for whom a sudden absence from public life often means they have been killed or imprisoned, in Kim Jong-un's case it is said to be down to Elvis-style weight gain as a result of his unhealthy diet.