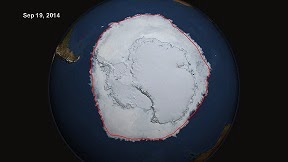 NASA says the sea ice record reflects the diversity and complexity of Earth’s environments. I say it represents a fail of the global warming models. I don't believe they predicted this change.


Sea ice surrounding Antarctica reached a new record high extent this year, covering more of the southern oceans than it has since scientists began a long-term satellite record to map sea ice extent in the late 1970s. The upward trend in the Antarctic, however, is only about a third of the magnitude of the rapid loss of sea ice in the Arctic Ocean.
The new Antarctic sea ice record reflects the diversity and complexity of Earth’s environments, said NASA researchers. Claire Parkinson, a senior scientist at NASA’s Goddard Space Flight Center, has referred to changes in sea ice coverage as a microcosm of global climate change.
Just as the temperatures in some regions of the planet are colder than average, even in our warming world, Antarctic sea ice has been increasing and bucking the overall trend of ice loss.