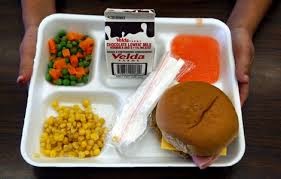 The liberals who are waging war on Christianity probably cheer when Islamic extremists whack off a Christian head.


MORA, N.M. (CBS Las Vegas) – A dad is claiming that his daughter was kept from praying prior to eating her school lunch by a school administrator.
Patrick Ashe explained that his daughter, who is a sophomore at Mora High School, was prevented from praying before her meal at lunch about a week ago by the Mora Independent School District Superintendent Dora Romero.
“(She) came home from school and she said, ‘Dad I have something to tell you. Today for lunch right before I was going to eat, I bowed my head to pray, and the superintendent came up to me and said I couldn’t do that,’” Ashe told KOAT.
Ashe shared that his family is Catholic and that his home is draped with crosses. He and his family say a prayer before dinner and that it’s something he wanted his daughter to learn to do at a young age.
“It’s just very important to me to thank God for putting food on your table and for leading you through life,” Ashe told KOAT.