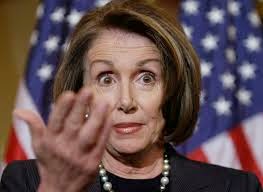 I would like to say Nancy Pelosi is delusional when she claims democrats will sweep the House and presidency in 2016, but with the current GOP leadership more interested in fighting their base than democrats, anything is possible.


WASHINGTON (CNN) — About a month from the 2014 midterm elections House Democratic Minority Leader Nancy Pelosi was already predicting a sweep for her party in the 2016 election.
Referring to Republicans, Pelosi said, “Their days are numbered. I know that in two years there will be a Democratic Congress and a Democratic President.”
Pelosi has publicly urged former Secretary of State Hillary Clinton to run for president and said if Clinton does decide to run she would win.
While she was clearly looking ahead the top House Democrat was careful not to concede the election this November. Pressed about the prediction she made earlier this summer that her party would pick up the 17 seats they would need to regain the majority in the House, Pelosi replied, “I think we will do OK.”
Keep on reading…