McConnell caves on doing anything serious about Obama's Immigration EO before the EO is issued... 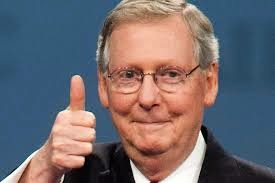 Sen. Mitch McConnell is a negotiating idiot.This is tantamount to us telling Iran we would never use military force to stop them from getting a nuke.


“I’ve been very disturbed about the way the president has proceeded in the wake of the election,” Sen. Mitch McConnell (R-Ky.) said Thursday after being elected majority leader in the next Congress…
Still, McConnell reiterated that there will be no government shutdowns or debt defaults while the GOP is in charge, despite talk among some Republicans of seeking to stop Obama’s immigration action through the appropriations process.
“We’re not shutting the government down or threatening to default on the national debt,” McConnell said…
“We’d like for the president to recognize the reality that he has the government that he has, not the government that he wishes he had,” McConnell said.