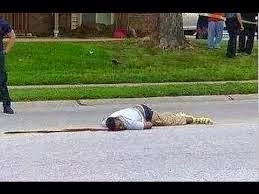 Least surprising story of the day.


The Ferguson grand jury is expected to make an announcement today about whether Officer Darren Wilson will be indicted for fatally shooting Michael Brown back in August. Brown family attorney Benjamin Crump was on MSNBC earlier this afternoon talking about the impending decision, and Joy Reid asked him exactly what the family is planning if Wilson is not indicted. […]
“If there’s no indictment, the federal government is investigating the matter, so they will want to know if there’s any federal charges, but if not then the only remedy they will have left is a legal civil matter, and so we’re going to explore every legal avenue to get them some sense of justice.”