Obama in 2010: Ignoring current immigration laws "unwise and unfair... could lead to a surge in more illegal immigration" 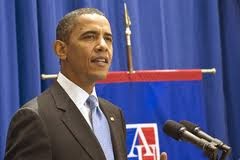 Our task then is to make our national laws actually work -– to shape a system that reflects our values as a nation of laws and a nation of immigrants.  And that means being honest about the problem, and getting past the false debates that divide the country rather than bring it together.
For example, there are those in the immigrants’ rights community who have argued passionately that we should simply provide those who are [here] illegally with legal status, or at least ignore the laws on the books and put an end to deportation until we have better laws.  And often this argument is framed in moral terms:  Why should we punish people who are just trying to earn a living?
I recognize the sense of compassion that drives this argument, but I believe such an indiscriminate approach would be both unwise and unfair.  It would suggest to those thinking about coming here illegally that there will be no repercussions for such a decision.  And this could lead to a surge in more illegal immigration.  And it would also ignore the millions of people around the world who are waiting in line to come here legally.