Obamacare architect Jonathan Gruber is the gift that keeps giving... 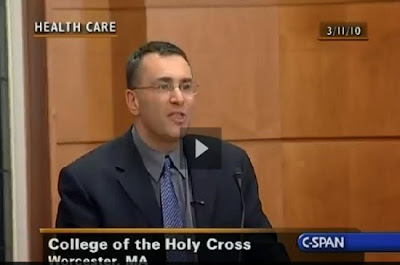 
Can we get this guy a TV show?


A fourth video has emerged of Obamacare architect Jonathan Gruber insulting the American people and revealing that the Obama administration misled those very American people in order to pass the law.
“Barack Obama’s not a stupid man, okay?” Gruber said in a college talk at Holy Cross in March 2010, making clear he thinks Obama is smarter than the American people, whom he has called “stupid.”
“He knew when he was running for president that quite frankly the American public doesn’t actually care that much about the uninsured,” Gruber said. “What the American public cares about is costs. And that’s why even though the bill that they made is 90% health insurance coverage and 10% about cost control, all you ever hear people talk about is cost control. How it’s going to lower the cost of health care, that’s all they talk about. Why? Because that’s what people want to hear about because a majority of American care about health care costs.”
Keep on reading…