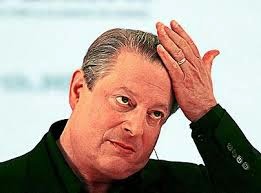 This great list by Jeff Dunetz is from Hot Air. I have excerpted the first four.


1) Through Halloween of 2014- The Global Warming Pause has lasted 18 years and one month. Heartland Institute analyst, Peter Ferrara, notes“If you look at the record of global temperature data, you will find that the late 20th Century period of global warming actually lasted about 20 years, from the late 1970s to the late 1990s. Before that, the globe was dominated by about 30 years of global cooling, giving rise in the 1970s to media discussions of the return of the Little Ice Age (circa 1450 to 1850), or worse.” So there was thirty years of cooling followed by 20 years of warming and almost 18 years of cooling…and that’s what the global warming scare is all about.
2) Antarctic Sea Ice is at record levels and the Arctic ice cap has seen record growth.  Global sea ice area has been averaging above normal for the past two years. But to get around those facts, the global warming enthusiasts are claiming that global warming causes global cooling (really).
3) Carbon Dioxide (CO2) is not a pollutant it’s what you exhale and it is what “feeds” plants. Without CO2 there would not be a single blade of grass or a redwood tree, nor would there be the animal life that depends on vegetation; wheat and rice, for example, as food. Without CO2 mankind would get pretty hungry. Even worse the global warming proponents keep talking about population control because they don’t want more people around to exhale, and let’s not talk about what they say about stopping methane (no spicy foods, no cows, no fart jokes).
4) There is not ONE climate computer model that has accurately connected CO2 to climate change. In fact CO2 is at its highest levels in 13,000 years and the earth hasn’t warmed in almost 18 years. Approximately 12,750 years ago before big cars and coal plants CO2 levels were higher than today. And during some past ice ages levels were up to 20x today’s levels. Keep on reading...

This guy is on honest side of the argument and presents a reasonable theory that explains climate cycles.