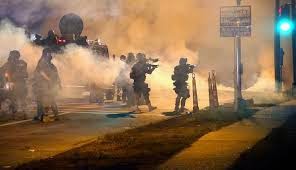 WTH does "staying on course mean? "


Some of the national leaders met with President Obama on Nov. 5 for a gathering that included a conversation about Ferguson.
According to the Rev. Al Sharpton, who has appeared frequently in St. Louis with the Brown family and delivered a speech at Mr. Brown’s funeral, Mr. Obama “was concerned about Ferguson staying on course in terms of pursuing what it was that he knew we were advocating. He said he hopes that we’re doing all we can to keep peace.”
Protest leaders said wholesale change was ultimately what they were demanding, though not all agreed on what that meant. Some called for the removal of the Ferguson police chief or the entire department. Others said they want the police to wear cameras; civilian review boards for all police shootings; or a requirement that ethnic and racial makeup of police departments match the communities they serve.