Not only is Antarctica's sea ice expanding, it is thicker than previously thought... 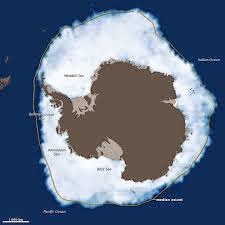 Global warming alarmists claimed although it might be expanding, the ice was very thin. They are wrong again.


Antarctica's ice paradox has yet another puzzling layer. Not only is the amount of sea ice increasing each year, but an underwater robot now shows the ice is also much thicker than was previously thought, a new study reports.
The discovery adds to the ongoing mystery of Antarctica's expanding sea ice. According to climate models, the region's sea ice should be shrinking each year because of global warming. Instead, satellite observations show the ice is expanding, and the continent's sea ice has set new records for the past three winters. At the same time, Antarctica's ice sheet (the glacial ice on land) is melting and retreating.
Measuring sea ice thickness is a crucial step in understanding what's driving the growth of sea ice, said study co-author Ted Maksym, an oceanographer at the Woods Hole Oceanographic Institution in Massachusetts. Climate scientists need to know if the sea ice expansion also includes underwater thickening. [Album: Stunning Photos of Antarctic Ice]