The White House calls Jonathan Gruber a liar; claims #Obamacare is all about transparency... 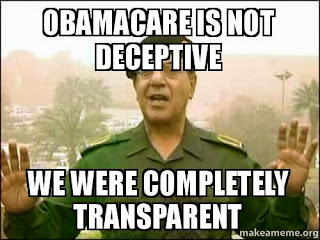 Baghdad Bob would be proud...


The White House is publicly distancing itself from MIT professor Jonathan Gruber's comments on the legislative process behind Obamacare and its "lack of transparency," which have been seized on by conservatives this week, saying that they are "simply not true."

Gruber also invoked "the stupidity of the American voter" in 2013 comments unearthed last week about the Affordable Care Act. He has since said that he regretted the comments and spoke "inappropriately."

“Transparency is a key goal of the ACA: consumers now have more access to information about their health insurance than ever before," White House spokesperson Jessica Santillo said in a statement to TPM.