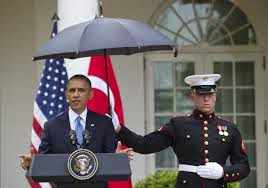 That's because veterans are smart enough to know Obama and many democrats hates them.


Military veterans voted for Republicans by a 20 percentage-point margin over Democrats in House races last week, according to the national network exit poll. Veterans made up 17 percent of all voters this year, and their strong preference for Republicans should come as no surprise — Mitt Romney won veterans by 20 points in 2012 according to the American National Election Studies post-election survey (the exit poll did not ask veteran status that year). [...]
But even among these groups veterans tilt more Republican than the public at-large. The oldest veterans backed Republicans by 27 points, while non-veterans in the same age group favored Republicans by a 4-point margin. Veteran men backed Republicans by 26 points, compared with a 12-point margin among male non-veterans. Women are an exception to this trend — exit poll included fewer than 100 women, but they leaned toward Democrats by a slightly wider margin than the public overall.