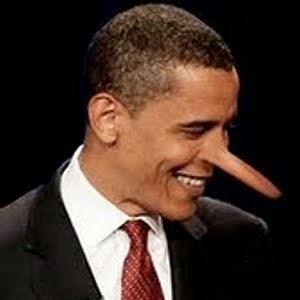 When the Washington post calls out a democrat for lying, you know it must be a blatant whopper.


Question: Your administration has deported a record high number, 1.5 million, of undocumented immigrants, more than your predecessor. And I know your administration took some steps last year to protect unintended undocumented immigrants from being deported. However many people say those efforts were not enough. What I’d like to know is what you’re going to do now, and until the time that immigration reform is passed, to insure that more people aren’t being deported and families are not being broken apart.
Obama: Well, look Jackie, this is something I’ve struggled with throughout my presidency. The problem is that you know I’m the president of the United States. I’m not the emperor of the United States. My job is to execute laws that are passed, and Congress right now has not changed what I consider to be a broken immigration system. [...]
The Pinocchio Test
The president has certainly been consistent on this issue—until he saw that the path through Congress was blocked. It’s clear from the interviews that the president was not being asked about executive orders that would have provided comprehensive immigration reform, but about specific actions that ended deportations of a subset of illegal immigrants—precisely the type of action he will shortly unveil.
Previously he said that was not possible, using evocative language that he is not a “king” or “the emperor.” Apparently he’s changed his mind. The president earns an upside-down Pinocchio for his flip-flop.