GM and Chrysler plans are not 'viable' 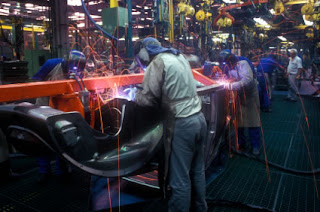 The Obama Administration is rejecting the viability plans GM and Chrysler were required to submit by March 31, 2009. They are giving Chrysler 30 days to arrange a merger with Fiat. GM is getting 60 days to do a complete restructuring. GM CEO Rick Wagoner has resigned at the request of the Obama Administration. There does not seem to be any criticism of the UAW from the Obama Administration. The UAW was a strong supporter of Obama during last years Presidential election. There was a requirement for the UAW to accept wages and benefits comparable to the transplant auto factories. So far, little progress has been made on that issue. Due to the intransigence of the UAW, bondholders have balked at writing off large portions of GM's debt.

GM, Chrysler have no 'viable' plans: US task force

General Motors and Chrysler have failed to lay out viable plans for their ailing companies, the White House said Monday, in a tough review which could shake up the nation's key auto industry.

In two separate reports, a task force set up by President Barack Obama analyzed the future prospects for both companies and warned they had failed to comply with the terms of a 17.4 billion dollar government bailout.

Obama is due to unveil his plan for the future of the key industry at 11:00 am (1500 GMT) Monday with both companies seeking an additional 21.6 billion dollars to survive the economic downturn which has sent global car sales plunging.

The task force concluded both companies had failed to meet the conditions for the bailouts by a March 31 deadline, and as a result neither company had "satisified the terms of its loan agreement." (excerpt) read more at breitbart.com

This is maddening to me. Ford was smart enough in the beginning to say no thanks.

What gets me is that President Obama says their not interested in managing GM or Chrysler. But the evidence says different to me.

Did you see how Wall Street is reacting? Good grief.

The only good thing was gold. I was watching the widget ExactPrice. When the Street opened it spiked big time. That may be in part because Russia called for a gold backed currency.

haljett said...
"The only good thing was gold. I was watching the widget ExactPrice. When the Street opened it spiked big time. That may be in part because Russia called for a gold backed currency."

Gold won't make a move until the dollar does. I think it will happen by June.

The thing you have to understand about government is that once it gets into something, it rarely gets out, whatever its sated intentions. Iraq is a good example. There was never any way to declare victory. At best we can rebuild it and hand some power back to Iraqis, but we will leave our puppet strings in place, and several bases just in case. GM will be no different. Government will take over part of the company, and will never leave entirely.