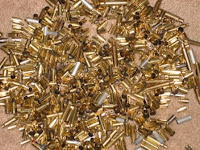 Gun rights are under stealth attack again. This time the Obama Administration is trying to curb gun rights by exacerbating the current ammunition shortage. Hoarding due to fear of gun ownership rights being restricted has already created a shortage of many types of ammunition. Now, the Department of Defense is stopping the sale of spent brass casings to re-manufacturers. The casings will have to be destroyed before sale. Why is this a problem? A significant portion of pistol and rifle ammunition is provided by the re-manufacturers. This severely curtails their production and puts additional strain on the current short supply. The only reasonable explanation for the DOD to do this is to crimp the supply of ammunition in this country. They will get 80% less money for the shredded casings as scrap metal. The raw metal will probably be sold to China. At least the Chinese will be happy about this.

Got that? From now on, remanufacturers of military brass will not be able to buy surplus brass from DOD--actually from Government Liquidators, llc.--the corporation that sells surplus materials for the U.S. government. At least, not in any form recognizable as once-fired brass ammunition.

Now all brass ammunition will have to be shredded, and sold as scrap.

Georgia Arms, who brought this to our attention, is the 5th largest ammunition manufacturer of centerfire pistol and rifle ammunition in the U.S.

"We're right up there behind Hornady," Larry Haynie told me.

He also told me with the cancellation of his contract to purchase this brass, and the ending of his ability to purchase any more expended military ammunition, he will have to severely curtail his operation--laying off approximately half his 60-person work force.

Haynie further pointed out this move is a stupendous waste of taxpayer money--reducing the worth of the brass some 80%--from casings, to shredded bulk brass. (excerpt) read more at theshootist.net

I've added your site to my "sites of note" blog roll. I like your site, and thought I would share your most recent links with my visitors. If you would like to add a reciprical link that would be awesome.

I've added your site to my "sites of note" blog roll. I like your site, and thought I would share your most recent links with my visitors. If you would like to add a reciprical link that would be awesome"

It's what communists do, restrict guns and limit speech.