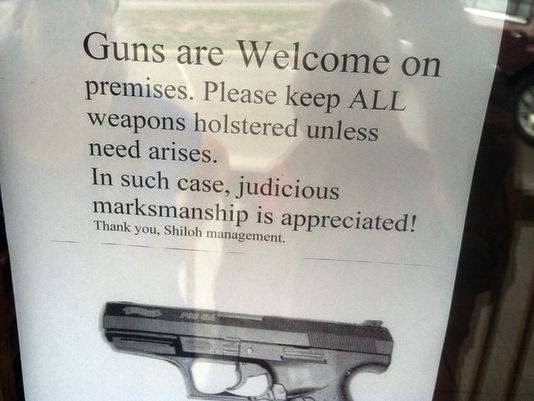 This restaurant in Tennessee is leading the way.


As many restaurants, including Starbucks, Sonic and Chili’s, tell customers to leave their guns at home, one restaurant in East Tennessee took a different approach — and gained quite a few customers.
Sharma Floyd, owner of Shiloh Brew and Chew, adopted a gun-friendly policy after she read about other restaurants banning firearms, WBIR-TV reported.
“[The other restaurant] had put up a sign that said ‘No Weapons Allowed’ and they were robbed at gunpoint two days later,” Floyd recounted. “That got me thinking.”
She posted a “Guns are Welcome” sign on the front door of her establishment about a month ago, and since then, she says business has really picked up.
Keep on reading…