Several hundred Iraqi Christians at WH chant: “Obama, Obama, where are you?" 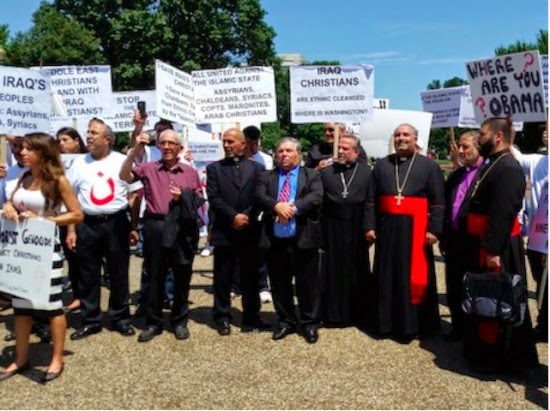 Why he is on the golf course of course.


Several hundred people gathered in front of the White House on Saturday, chanting, “Obama, Obama, where are you? Iraqi Christians call for you!”
Iraqi Christians held demonstrations in a number of cities on Saturday, including Washington, Paris, The Hague, Cologne, and London, in order to bring attention to the current assault on Christians by the Islamic State (IS)– formerly the Islamic State of Iraq and al-Sham (ISIS) jihadists. One week ago, Christians were forced out of Mosul, Iraq’s second largest city, and many Christian monasteries, shrines and churches have since been destroyed.
His Grace Mar Paulus Benjamin, a bishop in the Assyrian Church of the East, made the 12-hour bus ride from Chicago with parishioners to attend the demonstration in Washington. I spoke with him in front of the White House: “Iraq’s Christians are being ignored by the United States, the United Nations, and the human rights organizations,” the Bishop said. “For us, America is a symbol of freedom and protection of human rights. I think of America in World War II, when America came to the rescue of Europe. Then, the enemy was the Nazis. Today it is ISIS. The names are different, but the religious cleansing is the same.”
Keep on reading…