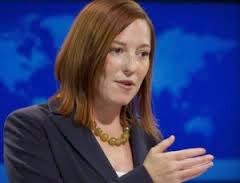 
The United States on Thursday urged Israel to do more to protect civilians caught in the crossfire between the Israel and Hamas, after Palestinian Arabs claimed to international media that four children were killed during an IAF air strike.
“We ask (Israel) to redouble their efforts to prevent civilian casualties. We believe there is more that can be done,” State Department spokeswoman Jen Psaki told reporters. “We believe that certainly there is more that can be done.”
“The tragic event makes clear that Israel must take every possible step to meet its standards for protecting civilians from being killed,” Psaki added....
Hamas has openly boasted about the “success” of its strategy of using civilians as human shields during Operation Protective Edge, which is now ending its tenth day, and the IDF has published extensive evidence of the practice.