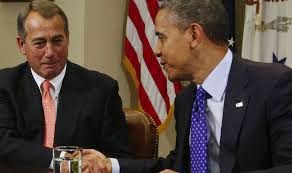 This lawsuit is just a ruse to make the base think the house leadership is fighting against Obama's lawlessness. In the unlikely event it progresses through the courts, the Supreme Court will not get around to it until Obama's term is up, if at all. All Boehner and Republicans have to do is refuse to fund Obama lawlessness. Of course that will likely mean another government shutdown.  Boehner and the current GOP leadership in the House and Senate lack the balls to make Obama blink.


Escalating their confrontation with President Obama, House Republicans gave Speaker John A. Boehner (R-Ohio) the power to initiate a lawsuit accusing the administration of breaching constitutional duties through executive orders that served as an end run around Congress.
The nearly party-line vote Wednesday, 225 Republicans voting yes and 201 Democratic nays, illustrated the increasingly polarized climate on Capitol Hill as both parties used the pending federal suit as a rallying cry to their voting bases ahead of the November elections. Halfway across the continent Obama basked in the House’s GOP move, almost gloating at the prospect of being sued for the actions he has taken in the face of a historically high level of congressional gridlock.