Lois Lerner: Some GOP are "crazies" and "assholes" 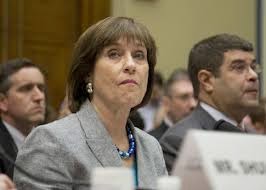 I am pretty sure she was referring to the Tea Party and other conservatives...


WASHINGTON (WJLA/AP) - A former IRS official at the center of the agency's Tea Party controversy referred to some right-wing Republicans as "crazies" and "assholes" in emails released Wednesday. A key GOP lawmaker says the remarks show that Lois Lerner was biased against conservative groups and targeted them for extra scrutiny.

Continue reading
Lerner headed the IRS division that handles applications for tax-exempt status. In a series of emails with an associate in November 2012, Lerner made two disparaging remarks about some members of the GOP, including one remark that was a profane characterization.
Rep. Dave Camp, who chairs the House Ways and Means Committee, released the emails Wednesday as part of his committee's investigation. The Michigan Republican says the emails show Lerner's "disgust with conservatives."
In one email, Lerner called some conservatives crazies. In the other, she called them "assholes." The committee redacted the wording to "_holes" in the material it released publicly, but a committee spokeswoman confirmed to the AP that the email said "assholes."