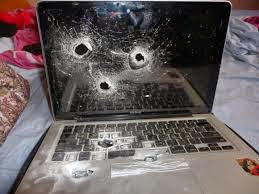 So, Lois Lerner's hard drive wasn't scratched. It was grazed?


The IRS has shown that it has a hard time finding emails and a hard time explaining its recycling of hard drives. Then there are the guns. The elite unit of the IRS that gets to carry guns doesn’t exactly have a perfect safety record.
According to a government audit, IRS Agents ‘Accidentally’ Discharged Guns 11 Times between 2009 and 2011. Some of those weapons discharges resulted in property damage or personal injury, claimed the report. In fact, agents accidentally fired their guns more times than they did intentionally, said the Treasury Inspector General for Tax Administration. The IRS’s Criminal Investigation Division is armed, but armed or not, the IRS wields enormous power.