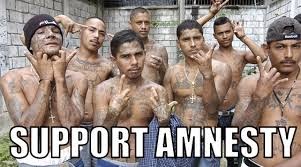 Is this the fundamental change Obama wanted to bring?


Hours before Texas Gov. Rick Perry announced he would send National Guard troops to the border, Texas state Senator Dan Patrick said there are at least 100,000 illegal immigrant gang members in the state.
On Monday's The Laura Ingraham Show, Patrick, who is also the Republican candidate for lieutenant governor, said from 2008 to 2012, 143,000 illegal immigrant criminals were arrested and jailed in Texas. He said these were "hardened criminals, gang members, and other criminals that we identified as being in Texas illegally."
"We charged them with 447,000 crimes, a half-million crimes in four years, just in Texas, including over 5,000 rapes and 2,000 murders," Patrick said. "We estimate we have 100,000 gang members here illegally."
Patrick also observed during his trips to the border and detention centers that many of the "young children" are teenagers and with parents and family members. He said there is a concern that some are "gang members" and that potential terrorists can exploit the porous border.