Strange: Apparently, you can bribe an immigration officer with egg rolls 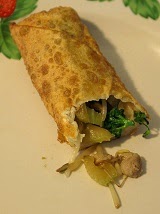 No so surprisingly, cash works too.

A U.S. immigration officer was sentenced on October 3, 2014 to two and a half years in federal prison, for accepting bribes in the form of cash and egg rolls from applicants seeking citizenship and green cards.
Mai Nhu Nguyen, 48, served with U.S. Citizenship and Immigration Services in Santa Ana for eight years. She pleaded guilty to receiving bribes as a public official between July 2011 and May 2013. As an immigration service officer, Nguyen had the authority to approve or deny immigration applications.
In one of the instances of bribery, Nguyen called a vendor to order 300 egg rolls. She then told an immigration applicant to pay for the $150 food order and deliver it to her workplace. Once the task was performed, Nguyen proceeded to approve the immigrant’s paperwork.
Keep on reading…