Bipartisanship: Obama threatens vetoes and executive orders after demos get their butt's kicked 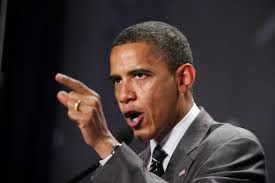 President Barack Obama came out swinging on Wednesday just 14 hours after a Republican wave swept over the U.S. Congress in an election that largely repudiated his policies.
'Congress will pass some bills I cannot sign,' he said, threatening to dust off a veto pen that he has used only twice in nearly six years.
And he hinted at executive orders that will enrage conservatives.
'I'm pretty sure I'll take some actions that some in Congress will not like,' he said. 'That's natural. That's how Democracy works.'
Much of reporters' tussling with the president focused on executive orders related to immigration reform – what some tea party Republicans call an 'amnesty' – which he plans to implement this year.
He acknowledged that the GOP won Tuesday's elections, but framed the results as a mandate for Republicans to work with him, instead of the other way around.
'Obviously the Republicans had a good night,' he said.

Obama is a sore loser. Celebrate today because tomorrow it will be back to the battle lines and the fight.