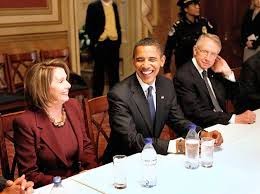 There won't be much to celebrate...


In a sign that they expect heavy losses on election night, Democratic leaders have decided not to throw any big parties in D.C. to watch the returns come in.
Instead, a few of the leaders will make themselves available to talk to reporters — and that appears to be it.
Traditionally, the major national party organizations rent out space in downtown Washington for viewing parties — the Dems took a ballroom in November 2006 when polls, rightly, suggested they would ride a wave to power — though the biggest events are in presidential election years.
In another sign of which party is optimistic this time around, the Republican National Committee said last week it had rented out the roof of the swanky W Hotel in downtown Washington to host its 2014 event.
Keep on reading…