Eric Holder is most pleased...


MADISON, Wis. — Neither snow nor rain nor heat nor gloom of night may keep postal carriers from the swift completion of their appointed rounds. But partisan politics, now that may be another matter altogether. 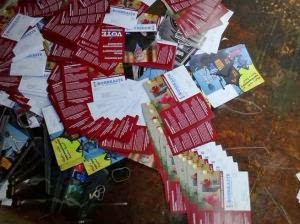 An investigation has been launched into a Neenah postal carrier who allegedly dumped into a recycling bin hundreds of political advertisement mailers from the campaign of Mike Rorhkaste, Republican candidate for Wisconsin’s 55th Assembly District, Rorhkaste tells Wisconsin Reporter.
Neenah Postmaster Brian Smoot, who was alerted to the incident on Thursday, confirmed there is an ongoing investigation into the matter, and referred Wisconsin Reporter to the Office of the Inspector General for the U.S. Postal Service.