Botox Mom is a Fraud? 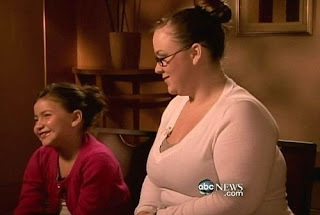 The woman who had her child taken away after going on TV and claiming she gave the daughter Botox injections, now claims she is a fraud.
TMZ:


The woman who went on "Good Morning America," claiming she injected her 8-year-old daughter with Botox, now swears under oath ... she made the entire story up for a few hundred bucks. TMZ has obtained a sworn declaration written by Sheena Upton, who claims she was recently approached by the British tabloid, The Sun, and asked "to play the role of Kerry Campbell" for a story called "I Give My 8-Year-Old Daughter Botox."

Upton now confesses The Sun paid her $200 adding, "I was provided with the story, instructions and a script to follow for a recorded interview."

After the story ran in The Sun, Upton says she was approached by "Good Morning America" and "Inside Edition" and claims she was offered "a large fee" to appear on camera. She went on both shows and re-told her story.

After the interview, child welfare officials took Upton's daughter away.

I think she did it because that's what she wanted...to get some money after by publishing her story. So maybe she sold this to a news paper or television but that's how she planned things....unfortunately for her people for Child Services started the investigations.....thing she didn't expected...but she deserves this, because she used the best anti-aging treatment on a 8 years little girl and that's unacceptable.