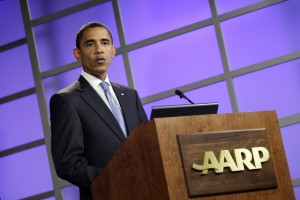 If you didn't like everything in the Obamacare bill, but lied through your teeth to help get it passed, President Obama hasn't forgotten you. The pay-offs keep coming. We have already learned 20% of the last round of Obamacare waivers went to Nancy Pelosi's congressional district and Harry Reid's entire state of Nevada got an exemption. The AARP was also critical in helping pass the Obamacare monstrosity. They supported the bill in spite the fact it included a of a half a billion dollars in Medicare cuts and was very unfavorable to seniors. Many people speculated the reason for the AARP's support was they planned to continue making a lot of money from selling Medigap insurance policies to seniors. In what appears to be a pay-off for support, President Obama is greasing the wheels of AARP's money-making machine.


The Daily Caller has learned that the Department of Health and Human Services (HHS) rate review rules, which it finalized on Thursday, exempt “Medigap” policy providers, like the American Association of Retired Persons (AARP), from oversight when such providers increase payment rates for their supplemental insurance plans.

The AARP is the nation’s biggest seller of Medigap policies, or supplemental healthcare plans that add onto what Medicare won’t cover for seniors. The senior citizens interest group advocated for Obamacare to include an attack on Medigap policies’ biggest competitor, Medicare Advantage.