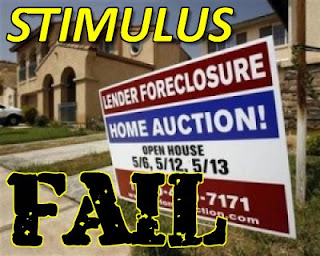 The new estimate is from the CBO. Apparently, all the Stimulus rosy employment promises aren't panning out.

During the law’s consideration in Congress, the Joint Committee on Taxation made the initial estimate.

CBO estimated the law lowered the unemployment rate by between .6 and 1.8 percent in the first quarter of 2011 and increased the number of people employed by between 1.2 million and 3.3 million during that same period.

Obama and congressional Democrats enacted the law, arguing it would provide a quick jolt to the economy. Republicans opposed the law, saying it would increase deficits and wasn’t designed to work quickly.

CBO estimated the government spending in the law had a major impact on the economy, increasing the Gross National Product by as much as 4.6 percent in the second quarter of 2010.