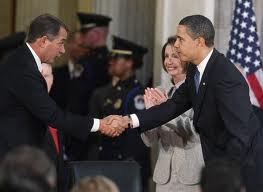 Are any of the current politicians in Washington actually capable of enacting a spending cut? It doesn't look good at the moment.

May 16 (Reuters) – A hard-won budget deal that was touted as the biggest domestic spending cut in U.S. history when it passed Congress last month will actually cause the government to spend $3.2 billion more in the short term, according to a new estimate released on Monday.
But the deal sets the government on track to spend $122 billion less over the next 10 years, the nonpartisan Congressional Budget Office said.