Terrorists in the Bluegrass State? 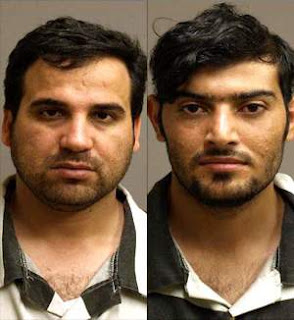 Waada Alwan and Mohanad Hammadi. (Photo:U.S. Marshal's Service)
Two Iraqi's living in Bowling Green, KY have been arrested for attempting to export stinger missiles to al Qeada and making IED's while in Iraq. How did these men get refugee status in the U.S.?


LOUISVILLE — Two Iraqi refugees living in Bowling Green were arraigned today on federal terrorism charges - including accusations of attempting to kill U.S. troops with explosive devices in Iraq. Waad Ramadan Alwan, 30, and Mohanad Shareef Hammadi, 23, are charged in a 23-count indictment returned by a federal grand jury in Bowling Green on May 26. The men made their initial federal court appearance today in Louisville.

Hammadi is charged with attempting to provide material support to terrorists and to al-Qaida in Iraq, as well as conspiracy to transfer, possess and export Stinger missiles.