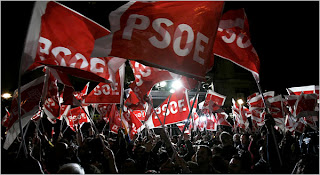 The financial crisis has forced deep cuts and left Spain burdened with 21.3 percent unemployment, the highest of any nation using the Euro as its currency. The jobless rate among the young stands at 40 percent and a total of 4.9 million people are out of work in Spain, the highest number since 1997.

Spain is forecasting limp growth of just 1.3 percent for itself in 2011, but even the Bank of Spain has rated that prediction as optimistic.

Unemployment is over 20% in Spain. It will take Obama a second term to raise unemployment that high here in America.
Posted by Bluegrass Pundit at 4:06:00 PM

That's what they get for electing a socialist.