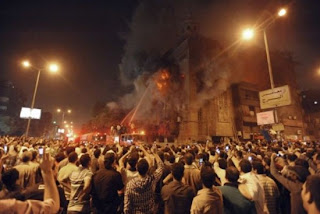 Please tell me why we are sending our tax dollars to Egypt?

(AINA) — A Military court in Egypt has sentenced three Christian Copts to 5-years imprisonment on charges of possession of firearms and pocket knives. The Court released all other Muslims and Copts arrested following clashes on May 19 over the re-opening of St. Mary and St. Abraham churches in Ain Shams West (AINA 5-24-2011). Copts Emad Ayyad and Ayman Youssef Halim were convicted of carrying firearms. Emad Ayyam’s son, Ayad Emad Ayad, was convicted of carrying a pocket knife.

Eight Copts, mostly students, were arrested in Ain Shams West and charged with rioting, violence and causing injury to citizens. Three of the Copts were also charged with possession of firearms and knives. Police arrested three under-age Muslims on charges of throwing stones at the army.

Defense lawyer Abraham Edward said “This is a very unjust, severe and cruel verdict.” He said that as lawyers they are unable to fathom what is going on. “Today’s case is very strange, a case where there is not one shred of evidence to indict them. If this case went in front of the International Court of Justice they would all be set free.” He criticized the five-year prison sentence handed down to Ayad Emad Ayad for carrying a pocket knife. According to the law this is punishable by a six months suspended sentence.

Since the current occupant at 1600 Pennsylvania Ave. agrees philosophically with those kinds of court rulings (illegal to carry items for self-defense, especially by Christians), then the flow of money to support that kind of government will continue unchecked as long as this administration remains in power