He is coming back 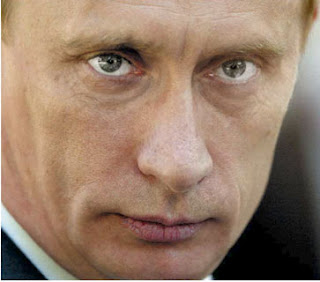 No, not Arnold. He is never coming back. I mean Vladimir Putin. He has decided to run for the presidency next year.


(The Australian) – RUSSIAN Prime Minister Vladimir Putin has decided to run for the presidency next year, raising the possibility of a power struggle with his protege Dmitry Medvedev, the incumbent Kremlin leader, say highly placed sources.

The once-close relationship between Mr Putin, the tough-talking former KGB officer who has inspired a personality cult, and Mr Medvedev, a softly spoken Twitter enthusiast, has become increasingly fractious amid speculation in Moscow that the younger man wishes to stand again.

Insiders familiar with both leaders said Mr Putin, who served eight years as president before becoming Prime Minister three years ago, had begun to lose confidence in Mr Medvedev’s loyalty.

Under the constitution, Mr Putin’s move to reclaim the presidency could see him rule for two consecutive six-year terms until 2024, when he will be 72. If so, he would have served as prime minister or president for 24 years in all.

This is not really a surprise, is it? If I remember correctly, most pundits believed that Medvedev was simply serving as a caretaker of the post while Putin served his constitutionally mandated time out of office. Perhaps Medvedev is now having delusions of grandeur and thinking that he could do another term on his own merits.