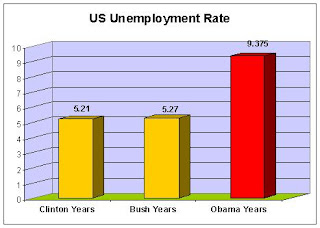 Uh, thanks President Obama. Wasn't the stimulus supposed to keep unemployment from going above 7%?


(Yahoo Finance)- Even as the economy recovers, the days of 5% unemployment may be gone for good.

A chorus of economists and labor market observers say that the “natural” or “structural” rate of unemployment has shifted up, meaning that Americans looking for work should get used to having a harder time finding it. The unemployment rate is currently 9% and could take until 2016 to reach the natural rate.

Slightly more than half of U.S. businesses are having trouble finding the right candidate for open jobs, according to a survey released today of 1,322 U.S. businesses by global recruitment firm ManpowerGroup. In 2010, only 14% of respondents had similar gripes.