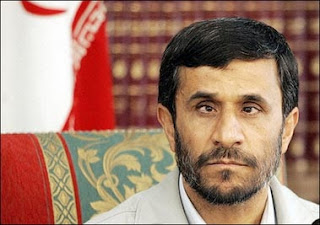 Iranian President Mahmoud Ahmadinejad is on the ropes in Iran. He is hoping for the return of what his follows believe will be the ultimate savior of humankind.


(PJM)- Based on a report from Iran’s Ayandeh, one of the officials within “The Deviant Movement” has informed his confidants that certain sources close to the “Mahdi’s Emergence Movement” have stated that an important event will soon change the course of operations to Ahmadinejad’s favor. According to interpretations offered by Ahmadinejad’s team, a high-ranking member of the Islamic Republic will meet with a climactic incident. This in turn will build up to the announcement of the “covert emergence” of the Twelfth Imam (or Mahdi) in Medina, Saudi Arabia.

Hardliners critical of Ahmadinejad  maintain that his team believes a covert emergence will commence on the 14th of Khordaad (June 5) in Medina, setting the stage for the announcement of the actual emergence in the next few years.