Obama NLRB: Unions have right to deploy giant rats or something 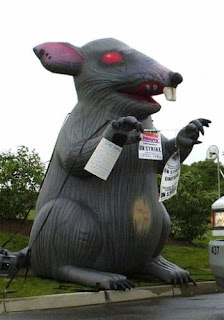 The real rats are the union bosses.

The National Labor Relations Board says putting up a 16-foot-tall rat balloon is allowed even if the business is not directly involved in the conflict between the union and another employer.

The Carpenters union and other labor groups often use the giant rat as a form of street theater. The goal is to shame companies that hire outside contractors who refuse to use union workers or pay union-scale wages.