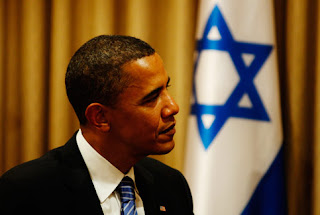 President Obama's demand Israel return to 1967 borders would uproot a half of a million Israeli Jews. The sad part is American Jews helped elect Obama and make this demand possible. Shame on both of them.


(CNSNews.com) – President Barack Obama has made an unprecedented demand on Israel, Jewish leaders said today after the president called for Israel to redraw its borders to where they were in 1967 before the Six Day War. One rabbi said Obama was, in essence, asking for “ethnic cleansing” of thousands of Jewish families.

“It’s immoral in that basically the president of the United States is asking that 500,000 people who live, work, and raise families around Jerusalem – Jewish families – that they be uprooted, resettled, deported from their homes, have their families broken,” Rabbi Aryeh Spero, founder of Caucus for America, told CNSNews.com.

“The president of the United States is asking for ethnic cleansing,” said Rabbi Spero.  “It’s ironic that the president, who speaks in humanitarian tones regarding the Palestinians, doesn’t have any humanitarian concerns toward 500,000 Jewish people and families that will be uprooted and deported from their homes.”