After seriously stepping in it, Missouri Republican Todd Akin is reportedly taking steps to withdraw...(Update-Akin Refuses to do the right thing) 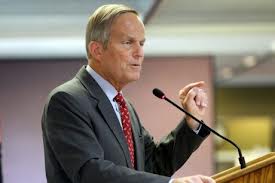 After making comments insulting to rape victims, Missouri Republican Todd Akin is reportedly going to withdraw. You just can't put the toothpaste back in the tube.


Missouri Republican Todd Akin has begun moving toward ending his candidacy after his remarks on rape and abortion provoked a firestorm, a top Republican said.

"Akin is taking concrete steps to withdraw by tomorrow at 5:00 p.m.," a senior Republican told BuzzFeed, adding that Akin could still change his mind.

But a Republican close to Akin said his position hasn't changed: He's still in the race.

Tomorrow afternoon is an important deadline: If he files papers to end his candidacy in Jefferson City tomorrow he can end his candidacy unilaterally; after that, he would have to file an application in court.

This morning everyone in America knew this story. Even my wife, who watches almost no news, asked me about it. On the other hand, a LGBT activist allegedly went into a Christian lobbying groups office last Wednesday with a plan to commit mass murder and leave Chick-fil-A bags by the victims. One man was shot. I asked my wife if she had heard that story. She had no idea. Keep in mind the context of the recent mass shootings at the Batman movie and Sikh temple. Apparently, a Republican making a stupid comment, and it was incredibly stupid, is far bigger news than a member of a demographic that supports Democrats attempting mass murder.
Posted by Bluegrass Pundit at 6:20:00 PM