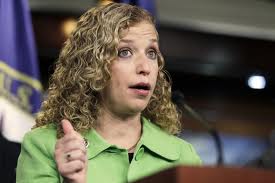 As hard as it is to believe, someone married this vile creature...

Dozens of reporters crowded Shultz, who was wearing a distinguishable pink suit, as she walked down the hallway of the convention center and into the Google Lounge set up inside the bloggers room. Shultz made a brief statement to cameras inside the Google Lounge about the need to support the nation’s veterans, and then promptly walked out of the room. Rep. Jan Schakowsky (D-Ill.) also spoke at the briefing about the war in Afghanistan.