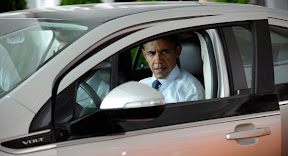 President Obama won't be making any campaign stops at GM factories this election cycle. In an attempt to make it look fair, they also uninvited Mitt Romney to visit...

Here are two people you won't find touring a General Motors plant during the political season this fall: Barack Obama and Mitt Romney.

GM, saved by federal loans a few years ago, desperately wants to avoid becoming the centerpiece of campaign rhetoric. So it has banned candidates from its plants at least until after Election Day, Nov. 6, despite the fact that the U.S. Treasury remains its largest shareholder.

The Detroit car giant wants to be viewed as a success story -- not the arm of any campaign. After all, Democrats, Republicans and independents all buy vehicles.