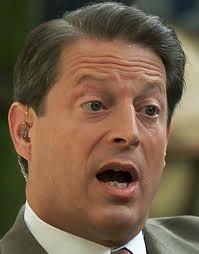 I hope he tinkles his pants.

“I would fear for the future of our environmental policy,” Gore said in an interview with TakePart. “Because they’ve made statements that are just completely at odds with the facts, and they seem to be really in lockstep with the large carbon polluters. But just based on their public statements, I would be very concerned about what they’d do.”

Gore didn’t let President Barack Obama off the hook either, saying, “I certainly understand” criticisms against him with regard to environmental policy.