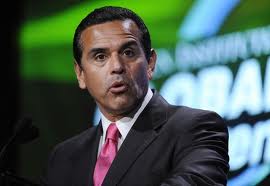 As the GOP prepares to showcase some of its rising Hispanic stars during the next two days of its national convention, the Democratic mayor dismissed Republican overtures toward Latinos as insincere.

“You can’t just trot out a brown face or a Spanish surname and expect people are going to vote for your party or your candidate,” Villaraigosa said at a press conference here organized by the Democratic National Committee [he's the convention chair].