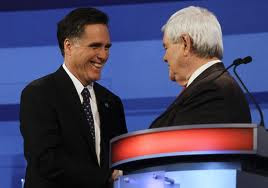 Kudos to Newt Gingrich. Romney should offer his a position in his administration.

In an open letter to delegates released Tuesday, Gingrich says it’s time for all Republicans to come together to defeat President Barack Obama and Vice President Joe Biden.

Gingrich says he is releasing all delegates bound or pledged to his candidacy...